In partnership with the National Film and Video Foundation (NFVF) and the Canadian Film Center (Media Lab), the DFA offers training to both filmmakers and trainers in the Business Model Canvas to assist filmmakers to develop more comprehensive strategies for their film projects. In 2012 Tina-Louise Smith (Accidental Films and TV) travelled to The Hot Docs Canadian International Documentary Festival in Toronto with the Documentary Filmmakers’ Association’s (DFA) delegation of South African documentary filmmakers. There she attended a four-hour workshop on how to apply the canvas to documentary film projects. Working under the auspices of the DFA, and partnering with the CFC Media Lab’s Ana Serrano and Orla Garriques, Tina-Louise Smith of Accidental Films and TV and Orla Garriques of OG & CO Media designed a Business Model Canvas programme for South African producers. In 2014 the pilot programme was solidified and delivered at the 2015 Durban FilmMart. 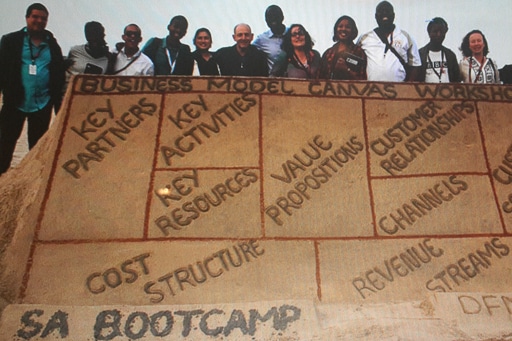