SABC3 will be commemorating the 47th anniversary of Ahmed Timol by screening two documentaries in memory of the anti-apartheid activist in the month of October.
Ahmed Timol, 29 year school teacher from Roodepoort and member of the then banned South African Communist Party accompanied by Saleem Essop, medical student, were both detained at a routine police roadblock on the evening of 22nd October 1971.  They were both taken to the Newlands Police Station and then to John Vorster Square Police Station (now known as Johannesburg Central Police Station). Police claimed that Timol committed suicide by jumping to his death during routine interrogation on the 27th October 1971 from the 10th floor of John Vorster Square Police Station. Essop was beaten near death and landed up in hospital. A 1972 Inquest found that Timol committed suicide and that nobody was responsible for his death and Essop was sentenced to five years imprisonment on Robben Island.
The repeat broadcast of Indians Can’t Fly traces Timol’s upbringing in Breyten, Mpumalanga, and then Roodepoort. Interviews are conducted with his comrades, former teachers and students, Security Branch policemen and advocate George Bizos, who represented the Timol family at the inquest in 1972. The documentary narrated by Timol’s nephew Imtiaz Ahmed Cajee, author of Timol: Quest for Justice, and directed by Enver Samuel has won two South African Film and Television Awards (SAFTAs) and has featured in local and international film festivals.
Director Enver Samuel, in the documentary, Someone to Blame – The Ahmed Timol Inquest, weaves a compelling narrative that draws on the 2017 re-opening of the inquest on the untimely death and brutal murder of the young Ahmed Timol in 1971. Samuel, an acclaimed filmmaker, builds on Indians Can’t Fly (2015), a previous documentary that deals with Timol’s life, his detention and his death. For the sequel, he uses newly recorded interviews and the court procedures and he contextualises the new developments by using archival material and graphical representations. Samuel constructs an intimate overview of an event that sets the scene for the families and friends of many other South Africans who died in detention during the apartheid years to also pursue the truth of what happened to their loved ones.
It has been argued that as a result of the massification of the media, documentary films have become an important source to create discourse in the public domain as a way to simulate discussion and debate on the social, political and economic challenges in present day society.
Samuel’s documentary in collaboration with the Ahmed Timol Family Trust has created an important addition to the existing archive and will serve to preserve heritage that South Africa is not proud of, but that must be acknowledged by all South Africans as we endeavour to build a new, just society.
DETAILS OF SCREENINGS: 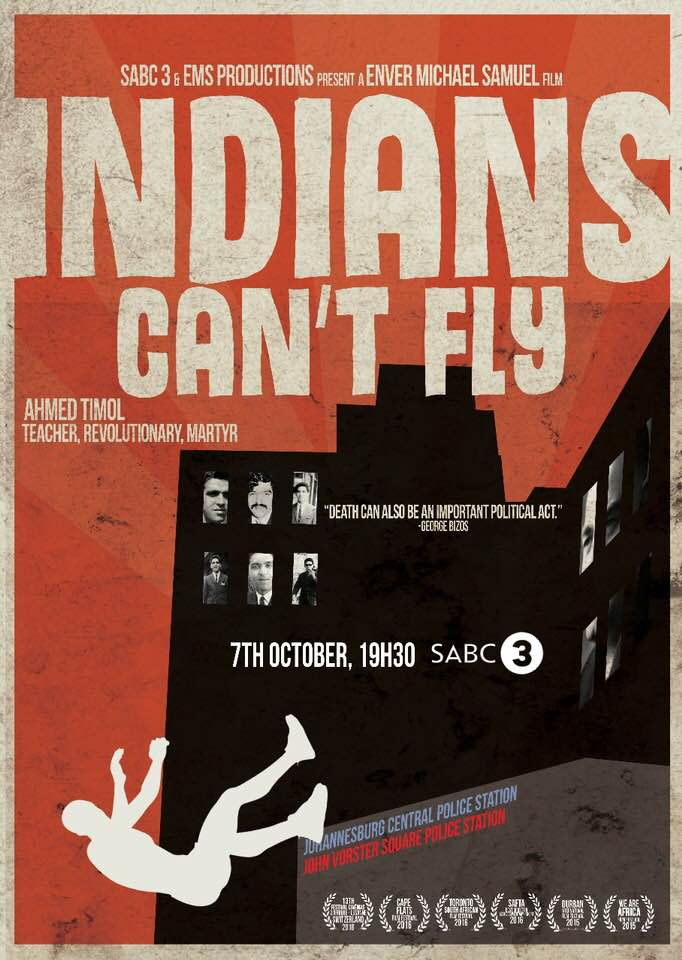